A Winding Path to the Promised Land 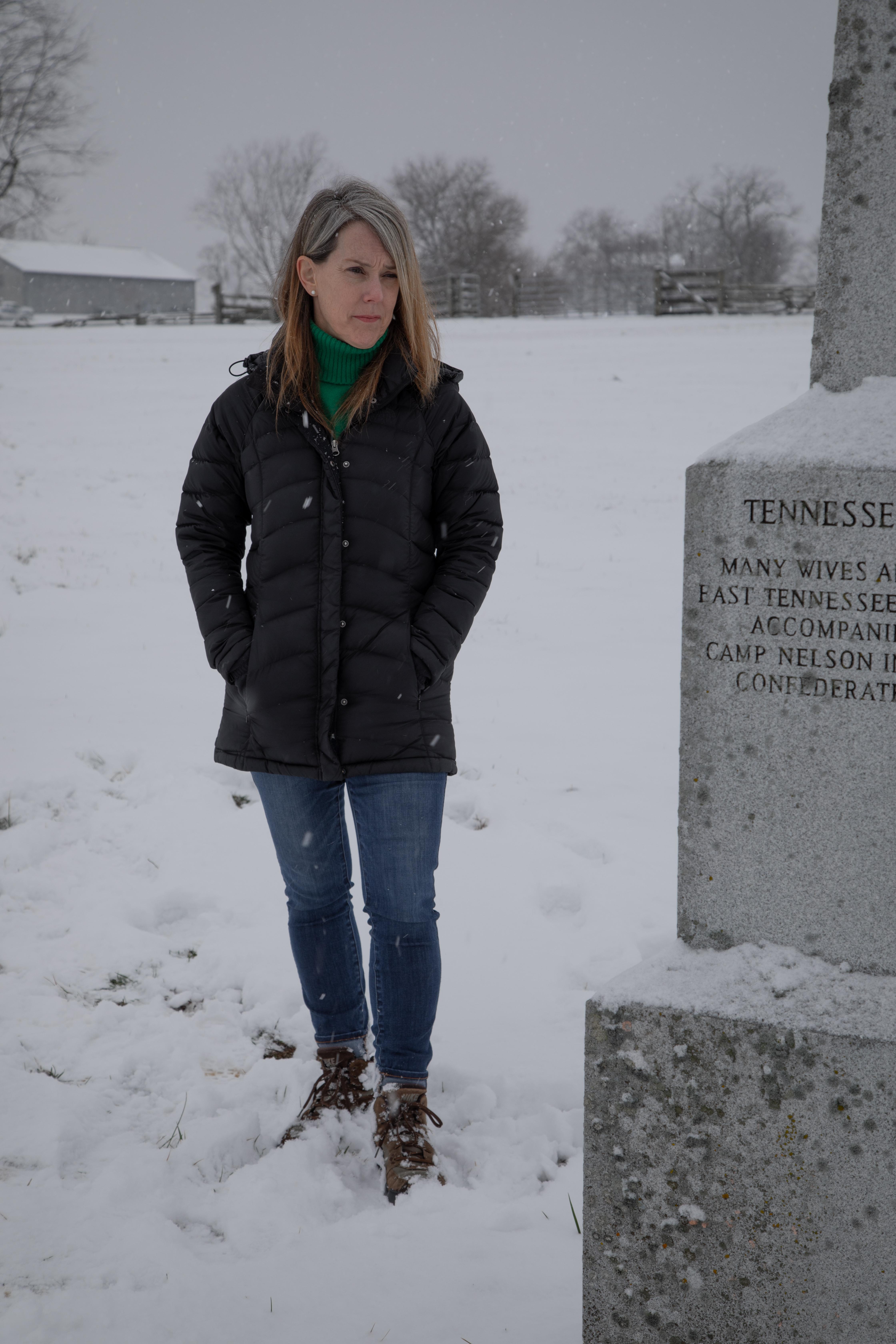 Camp Nelson, a Civil War-era historic site south of Lexington, helps to fill a gap in the epic story of the end of slavery in the United States. At this site, along with about 300 others in the South, the camp offered refuge to people emancipated from plantations and a place where men could enlist in the Union Army.

Here at Camp Nelson and many other places, African Americans began or continued a serpentine journey to freedom—one that American history has, until now, failed to map.

“The story of freedom in the United States is a story of long, drawn-out battles, fights and struggles,” said Amy Murrell Taylor, author of the acclaimed book “Embattled Freedom: Journeys through the Civil War’s Slave Refugee Camps.” “Freedom did not come overnight to enslaved people, and we’ve been telling the story of this great moment in the history of American freedom in an overly simplistic way that fails to examine what enslaved people actually did to win their freedom.”

Taylor — the  T. Marshall Hahn, Jr. Professor in history — has received the Frederick Douglass Book Prize for “Embattled Freedom.” The award is given annually by the Gilder Lehrman Institute of American History and the Gilder Lehrman Center for the Study of Slavery, Resistance and Abolition at Yale University. She also received the Tom Watson Brown Book Award from the Society of Civil War Historians and the Watson Brown Foundation as well as two awards from the Organization of American Historians and one from the Kentucky Historical Society.

The refugee camps, run by the Union Army, offered at least some solace to freedom-seeking African Americans, who found paid employment but also faced hunger and violence once they left their places of captivity. And, as the war ended and the camps emptied, their struggles continued as they sought to support themselves in an often hostile culture. Taylor brings these stories to life in her book.

“These stories bring some clarity to the question of what happens with emancipation,”she said. “In the American imagination this period has often seemed confusing or has been overlooked, and we haven’t been able to wrap our minds around it. So I was hoping to shed new light on that.”

The refugee camps housing these formerly enslaved people—often referred to as “contraband,” as if people could be called that—were hardscrabble at best, with tents, dirt floors and rations. Later, as at Camp Nelson, the refugees were able to settle in huts. But the fact that the Union Army was running them proved to be beneficial to Taylor’s work. For one thing, first-hand accounts of former slaves are few.

“When you start off a project like this, the first thing you want to do is find first-hand accounts from formerly enslaved people telling us what they experienced,” she said. “And that kind of treasure trove does not exactly exist. So it took years of archival work.”

As anyone working in U.S. genealogy knows, the Union Army kept good records, and these records gave Taylor insight into the struggles of a people. In some cases, these records were the first time the U.S. government recognized that African Americans had names.

“I realized early on that looking at the records of the Army was going to be crucial,” said Taylor, who received a National Endowment for the Humanities grant to fund her plunge into the archives. “That proved to be true. I wish I could go back and thank its clerks for their record keeping because they kept track of people who come in and out of the lines. They kept track of who was getting food rations. They kept track of who was working for whom and who was getting paid. They wrote all of this down, and they were naming formerly enslaved people for the first time. It was the first time the federal government had in a systematic way named them—a first and last name. In a way it’s not the treasure trove we’re looking for, but there’s a lot there.”

One of the primary benefits of the camps was education—the refugees wanted to learn how to read the Bible and write for themselves. Missionaries from the Society of Friends and other denominations came to help. One preacher, the Rev. Gabriel Burnett, was a former slave himself; he worked with the formerly enslaved people in Camp Nelson and later went West with others from Kentucky to start African American churches and settle in Kansas. Denominations, particularly the Quakers, proved to be another source for primary information.

“There were records kept by people the formerly enslaved people came in contact with,” said Taylor, who earned a doctorate at the University of Virginia. “What happened is that many of the abolitionists out there in the North quickly turned their efforts to relief work and education, recognizing that this was what they’d been working for all these years. Slavery is ending, and now it’s time to assist the former slaves. The Quakers basically go directly south. The Philadelphia Quakers go to Virginia, and the Indiana Quakers go to the Mississippi Valley. The Quaker records are very thorough.”

The story of Camp Nelson, a National Monument, proves particularly poignant. Historical accounts trace the freeing of enslaved people to the arrival of Union troops in an area or to the 1863 Emancipation Proclamation. However, because Kentucky didn’t secede, the proclamation didn’t apply to its enslaved population. As a result, the camp only began accepting freedom-seeking people in 1864, as the war was swinging in favor of the Union; and even then, formerly enslaved people had difficulty gaining entry.

“Emancipation comes late,” she said. “Emancipation policies don’t apply. So it takes longer than everywhere else for enslaved men to be allowed to enlist—not until the summer of 1864. But even when that happens, their wives and children, who everywhere else in the South can go to a Union camp and begin to live as free people, get expelled at Camp Nelson. The Union officials keep expelling the women and children even though they’re enlisting the men. When these women and children are expelled, they’re set loose and exposed to the violence of the slaveholding class.”

One particular expulsion happened in November 1864, when more than 400 women and children were expelled, but it was a really cold night—17 degrees—and they were left on the side of a road. They found an old meeting house, and that night a child died, and within weeks many more died, Taylor said.

“Sympathetic white officials at Camp Nelson thought this was the last straw and started sending first-hand accounts from some of these families to newspapers. They start using the media and they start contacting members of Congress saying look what’s happening: You have this Army saying it’s fighting for freedom, and they’re basically killing the women and children,” she said. “This big moment pushes Congress to act, and Congress passes a new law in March 1865 stating that any wife and child of a Union soldier can be admitted and freed. So it’s the first time any enslaved woman or child in Kentucky has a chance to attain freedom.”

Taylor’s book reaches beyond the refugee camps themselves to look at the struggles freed people endured. Often they gained a foothold in society, only to be thrown back into poverty and violence. One such story involves Edward and Emma Whitehurst, who once off the plantation opened a store to serve the Union Army.

“The store idea was really smart because there are more and more soldiers flooding into the area,” she said. “There’s a market that they can meet. But setting up a store proved to be only the beginning of their story. It was shocking to me how they had to continually defend their rights to own property and keep the returns from their labor. It’s particularly shattering to learn that the Union Army at one point allowed its soldiers to just rampage through their store and take everything out of it without paying them. Here they are, struggling as they get on their feet, and they had everything taken away by the Union. That was devastating.”

Taylor’s own efforts have found ways to give voice to these people through Army records, petitions, testimonies, diaries and other sources. What makes “Embattled Freedom” so compelling, however, is how the struggle of freed slaves to overcome the bitterness of captivity upends how students of history think about this era.

“Researching this history, I wasn’t constantly following paths of progress,” she said. “Instead, we're hit with these terrible backwards steps, violence, illness, everything that was constantly pulling them back. It’s a shattering subject to research. But there’s hope in it too.” &