AI Opens New Vistas in Astronomy: Yuanyuan Su uncovers the secrets of a galaxy cluster not so far away 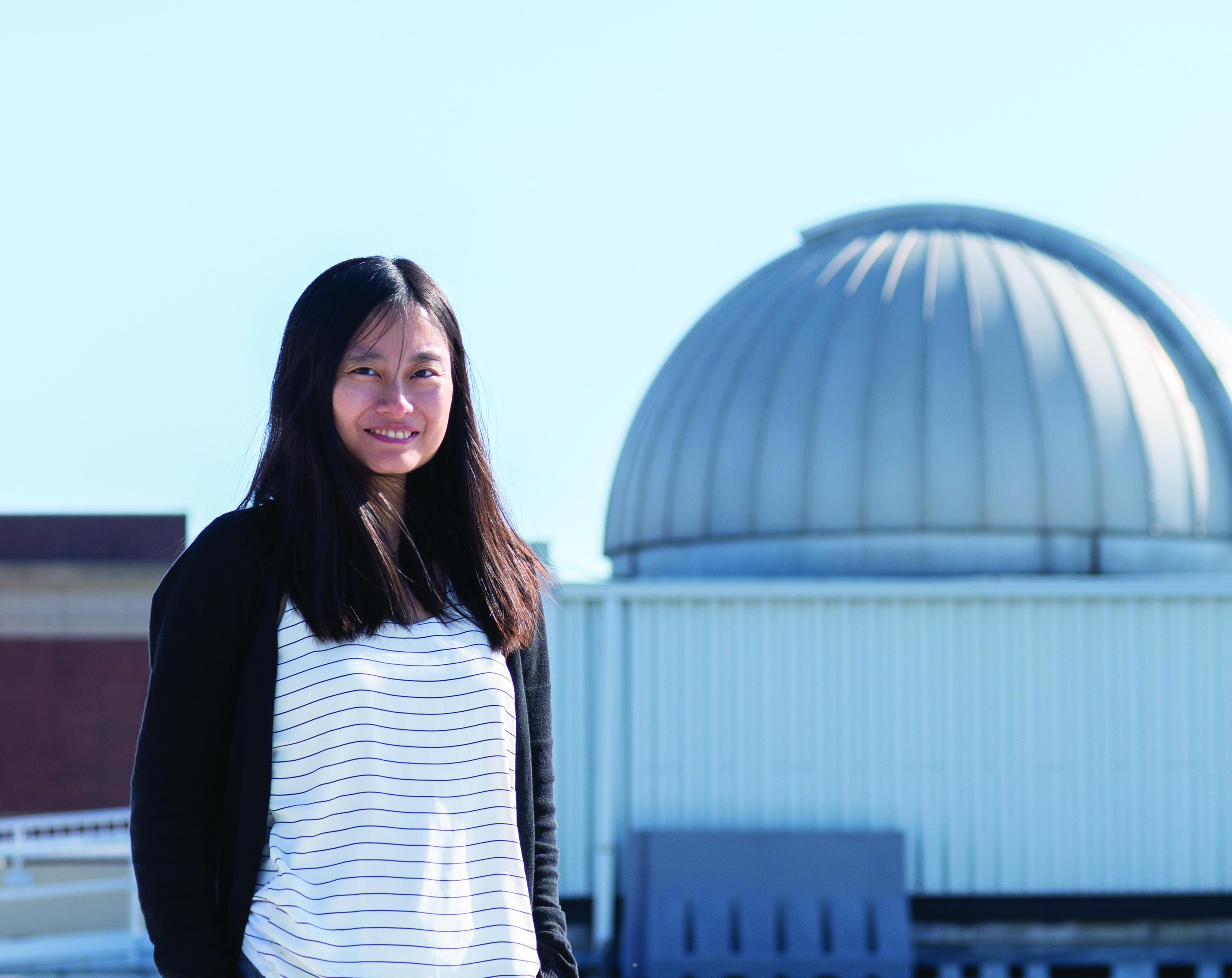 As humans search for intelligent life–or any life at all—in the universe, they’re using their own intelligence to craft new ways of exploring galaxies. They’re even starting to use artificial intelligence, itself a new frontier, to deepen science’s understanding of what lies beyond.

That’s where Yuanyuan Su, an assistant professor in the Department of Physics and Astronomy, is applying her own intelligence. She and her lab are using artificial intelligence to analyze images gathered from the Earth’s latest telescopes and satellites to figure out what’s actually there.

“There are two milestones in the history of modern astronomy,” Su said. “The first was to put cameras on telescopes. Instead of sketching them, as we had in the past, we can now take pictures of celestial objects. Astronomy thus develops from being subjective to objective.

“The second was to put telescopes in space, allowing us to look at the high energy (X-ray and gamma ray) part of the universe. We can understand the physics behind astronomical phenomena with their high energy properties. Astronomy becomes astrophysics.”

“AI-based techniques are being applied to fully utilize the large astronomy datasets from the ongoing and future multi-wavelength surveys,” Su said.

Su studies the hot plasma spaces in between galaxies, called the intracluster medium, using space X-ray telescopes. She is collaborating with Nathan Jacobs, Yu Zhang and Gongbo Liang at the Department of Computer Science in the UK College of Engineering to find a way of using techniques from machine learning and computer vision to analyze astronomy images.

This project stems from Su’s primary research, which involves the study of galaxy clusters.

“Galaxies in our universe do not distribute uniformly in space,” Su said. “They tend to be clustered together. Clusters of galaxies are the largest and most massive gravitationally bound objects in the universe. The study of galaxy clusters has impacts on cosmology and many aspects of astrophysics.”

The team has used a deep neural network to extract information on the population and evolution of galaxy clusters from their X-ray images, which yield results superior to using conventional approaches.

The algorithm is run on high-performance computing clusters operated by the Center for Computational Sciences at UK.

“Such neural networks were originally developed for classifying consumer photographs based on their image content,” said Jacobs, who is an associate professor of computer science and director of the Multimodal Vision Research Laboratory. “I find it exciting to adapt these techniques to address practical problems and basic scientific questions.”

Their work was published in 2020 by the Monthly Notices of the Royal Astronomical Society.

Su came to UK in 2019 after serving as a postdoctoral fellow at the Harvard-Smithsonian Center for Astrophysics.

"My office (at Harvard) was next to ‘the great refractor,’ probably the first telescope that took photographs,” Su said. “Annie Jump Cannon, and many other women astronomers, used it to classify the stars."

In addition to the AI project, Su is exploring multi-wavelength studies of galaxy clusters. Galaxy clusters are the largest gravitationally bound objects in the universe, containing thousands of galaxies that are held together by dark matter. The space between galaxies is filled with a diffuse gas, the so-called “intracluster medium."

This gas is so hot that it radiates in X-rays but is undetectable at visual wavelengths. Su and her colleagues use space-based telescopes to observe galaxy clusters since the Earth's atmosphere absorbs X-rays.

Su has published an Astrophysics Journal study using HISAKI, a small extreme ultraviolet space telescope operated by the Japan Aerospace Exploration Agency. It was originally designed to observe the atmospheres of the planets in the solar system.

A team of U.S. and Japanese scientists led by Su has used HISAKI to study a cluster of galaxies 6.4 billion light years away, leading to HISAKI’s first astrophysical result.

“It is brightest at the center of the cluster where the hot gas should be quickly losing its energy, as it emits so many X-rays," Su said. "We therefore expect to observe this gas at lower temperatures as a result of this radiative cooling."

Su became interested in astrophysics at a young age. However, her path to becoming an astrophysicist wasn’t always smooth.

“When I was in school, it wasn’t considered an ideal path for girls to study physics,” Su said. “I felt isolated and doubted my choice when I became the only female physics major in my class. But I was fortunate to get to know great women scientists in my career. I have been deeply influenced and encouraged by them.”

She is originally from Sichuan, China, the hometown of giant pandas. Su received her Ph.D. from the University of Alabama and went on to a postdoc in California before moving to Harvard. Over the last two years, Su has become not only a professor, but a mother as well.

“I want to be a female role model for my students and my baby girl,” Su said. “I am so glad to be at UK. I am grateful for talented colleagues, hard-working students, and I found my collaborators.”&