The Kentucky Geological Survey (KGS) at the University of Kentucky has chosen a site to drill a 4,800-foot-deep stratigraphic research well in eastern Kentucky. This project is part of the carbon dioxide (CO2) storage research mandated and funded in 2007 by the Kentucky General Assembly in the Energy Independence and Incentives Act, which also funded part of the cost of a research well in Hancock County in 2009.

KGS has partnered with Hanson Aggregates for access to property at their AA Limestone quarry, in northern Carter County. Hanson Aggregates is a subsidiary of Lehigh Hanson, Inc., which is part of the HeidelbergCement Group, one of the largest building materials manufacturers worldwide.

After a lengthy technical review, the site was chosen based on both its location and geology. The well will be a stratigraphic-test well designed to collect geologic information about the nature of the deep subsurface formations in northeastern Kentucky.  In the deep subsurface of this area there are several geologic formations with properties that may be suitable for CO2 storage in the future deep below the surface. 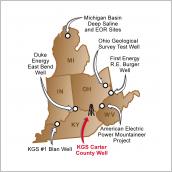 The site is about 10 miles south of the Ohio River, where several large coal-fired power plants are located.  It lies between the Duke Energy East Bend research well to the west in Boone County of northern Kentucky, and the American Electric Power Mountaineer CO2 capture and storage project to the northeast in West Virginia. The East Bend well evaluated the Cambrian Mount Simon Sandstone, and the Mountaineer wells injected into the Rose Run Sandstone and Knox dolomites. The Carter County well will provide important data for northeastern Kentucky and adjacent southeastern Ohio.

There are no plans for commercial CO2 storage in Carter County or surrounding counties. The research will help KGS and the state to learn reservoir rock properties of the region and gather data needed to evaluate any potential for future CO2 storage along the Ohio River industrial corridor. KGS will obtain rock cores, geophysical well logs, water samples, and test the reservoir and rock strength properties of several formations penetrated in the well, including the Ordovician Knox Group and Rose Run Sandstone, and the Cambrian Mount Simon Sandstone. The depth of these zones ranges from 3,000 to 4,700 feet below the surface.

"The geologic information that will be gained from this well will benefit many aspects of Kentucky’s minerals industries," said Jim Cobb, state geologist and KGS director.

"Kentucky has much at stake regarding successful efforts to manage carbon dioxide emissions from coal-fired power plants," said Len Peters, secretary of the Kentucky Energy and Environment Cabinet. "This carbon dioxide storage project is therefore an important piece in the state's 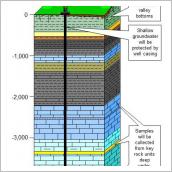 research and demonstration efforts to ensure we can continue using our coal resources in a carbon-constrained world. I commend KGS for reaching out to private sector interests to ensure the success of this research, and the Kentucky General Assembly for recognizing the importance of this type of activity for the Commonwealth."

The stratigraphic test well will pose no danger to people or property in the vicinity of the well site. Similar projects have been conducted safely in Kentucky and other locations around the country.

After the research project is completed, the well will be permanently plugged in accordance with state regulations. Like the Hancock County research well, this project is managed by the Kentucky Consortium for Carbon Storage (KYCCS), a KGS-industry partnership formed to carry out the CO2 storage research mandated in the Energy and Incentives Act of 2007.