An intervention created by a group of University of Kentucky faculty has proven successful in encouraging young women in an area of eastern Kentucky to complete the series of HPV vaccines to guard against cervical cancer.

“The worst part about these statistics is that no woman should ever experience cervical cancer,” said Robin Vanderpool, assistant professor of health behavior in the University of Kentucky College of Public Health.

Cervical cancer, a disease that is both preventable and treatable, remains a national public health concern particularly for women in medically underserved communities, such as those in Appalachian Kentucky. 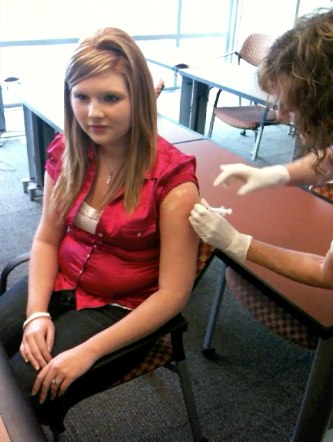 The most common prevention strategy currently is the three-dose human papillomavirus (HPV) vaccine. Despite the availability of the HPV vaccine, evidence suggests that young women are simply not completing the entire vaccination series as recommended for full cancer prevention.

UK faculty from the College of Public Health, College of Communication and Information, and Rural Cancer Prevention Center collaborated on the development and implementation of a DVD intervention designed to promote the completion of the HPV vaccination series among young adult women in the Appalachian communities of the Kentucky River Health District.

“Getting these women in the door for the first [HPV vaccine] dose is only half the battle,” reported Vanderpool, the corresponding author for the project. “We are focused on helping these women finish all three doses and follow-up with age-appropriate screening [Pap testing]. The challenge is staying engaged with the patient through the six-month vaccination schedule.”

Additionally, the research team wanted to  teach young women about the value of having regularly scheduled Pap tests throughout their lives and reinforcing this as being necessary even after having all three doses of the vaccine. So, the idea of “1-2-3 Pap” was created. After talking with young women from the community to understand barriers to vaccination and Pap testing, Elisia Cohen, associate professor in the Department of Communication, developed a 13-minute DVD message using local ‘stars’ from Appalachian Kentucky.

"We found that young women were eager to participate and had important stories and advice to tell,” reported Cohen.  “These women provided credible scripts explaining why receiving all three doses of the HPV vaccine combined with screening for cervical cancer, were two ways their generation can now protect themselves against this deadly disease.”

The video targeted women ages 18-26 years old, and encouraged them to make their own choice about completing the vaccination series. The research team partnered with nurses from the local health departments and set up free vaccine administration sites throughout the community in popular local places. The video was shown to a randomized group of young women after receiving the first dose of the HPV vaccine, and followed-up with standard reminder phone calls for the remaining dosages.

The researchers were impressed to find that the DVD worked. Young women enrolled in the DVD intervention were 2.5 times more likely to come back and complete the HPV vaccination series compared to women receiving standard-of-care (reminder phone calls only). More importantly, these results translate to fewer women being at risk for cervical cancer.

The research team is looking forward to seeing this effect in similar campaigns. “These findings can be replicated for other subpopulations, and scaled to fit statewide or even national campaigns,” said Vanderpool. “We are excited to see how this can impact the health of other communities.”

In the future, the UK colleagues are interested in engaging health care providers in this campaign. By gaining the support of practitioners, this intervention could be taken to new environments, such as doctors' offices or even schools.

This project was funded as part of the five-year cooperative agreement awarded from the Centers for Disease Control and Prevention (CDC) and appears in January’s issue of the Journal of Communication, the flagship publication of the International Communication Association, all communications specialists, and policy makers.

These findings highlight the recent success of a cervical cancer intervention in a medically underserved population. The researchers hope to help raise awareness throughout the month of January, National Cervical Cancer Awareness Month. To learn more about what you can do, please visit the Cervical Cancer-Free America website at www.cervicalcancerfreeamerica.org