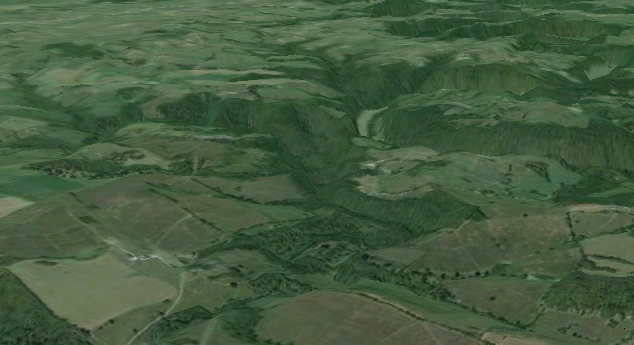 Google Earth image of part of the landscape at Shaker Village, KY.

Why was the Cycle of Erosion so successful, and so dominant, for so long? There are a number of historical, sociological, and political reasons that figure into this, but there are good scientific ones as well.

From a theoretical perspective, under the conditions Davis specified (an episode of uplift followed by a long period of no further uplift, erosion dominated by fluvial processes, and no major sea-level, climate or tectonic change), the postulated cycle of erosion is exactly what would happen, as physical models testify. Of course, those conditions have rarely (perhaps never) been met in Earth history for a long enough period to allow the cycle to run its course, but the reasoning was not at all unsound.

From the perspective of a landscape observer—a geographer, geologist, or layperson, and in the field or on maps and images—the cycle does provide a plausible explanation for the widespread occurrence of eroded landscapes where the ridges, peaks, and interfluves (the high bits) are, or at least appear to be, accordant (i.e., at approximately the same elevation). There are indeed many landscapes on our planet where the high parts appear to be part of a surface that has been dissected from the top down rather than the sticky-uppy parts having been raised from the bottom up.

I think some of the ideas in the Earth and environmental sciences about steady-state equilibrium are analogous to the Cycle of Erosion in several ways. First of all, they are (in many cases) seriously flawed and give misleading impressions about how nature works. Second, however, the reasoning behind them is often sound, though even more often based on highly simplified assumptions rarely met in nature. Third, they may provide at least superficially plausible explanations for observations. This is the case, for instance, with the steady-state model of graded stream profiles.

My ideas on the latter point are laid out in Phillips (2010; 2011), and my only contribution to debates on peneplains and such in Phillips (2002). There are many discussions and critiques of Davis’s cyclical ideas; several that I especially like are in Rhoads and Thorn’s (1996) edited volume The Scientific Nature of Geomorphology.