In terms of mass balances or budgets, geomorphic systems have three fundamental states, whereby losses or removals are either greater than, less than, or roughly equal to inputs or gains (i.e., steady-state). Thus a regolith cover, for instance, is either thinning, thickening, or maintaining steady-state relative to the rates of mass losses and inputs, and weathering and regolith formation.

The principle of threshold-mediated modulation holds that thresholds limit development on both ends (negative or positive mass balance), and that exceeding the thresholds may initiate development in the opposite direction. For instance, vertical accretion on alluvial floodplains is limited by an elevation at which regular flooding no longer occurs, thus limiting further accretion. In addition, confinement of flows within the channel may increase stream power and shear stress, thus ultimately resulting in stripping of the alluvium.

A specific example discussed by Phillips and Lutz (2008) is stream channel slope. While reverse slopes and overhangs may occur at the local, cross-section scale, at a reach scale geotechnical properties of the bed material in the landscape context determine a maximum slope gradient that can be maintained. At lower slopes, some minimum gradient is needed to maintain downstream water flux. Within a reach, gradients anywhere between the limits are possible, and exceeding the gradient thresholds results in adjustments (slope failures or ponding) that modify channel slopes away from the limiting gradient. 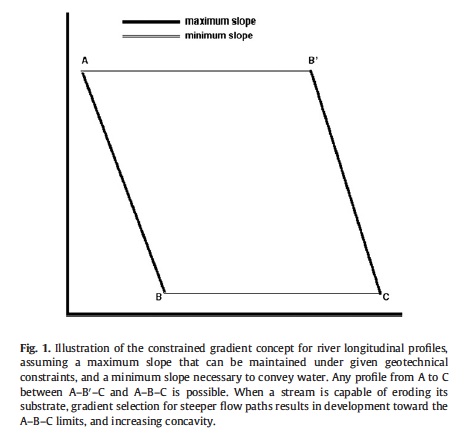 Thresholds are in some cases defined (or are non-trivial) at only one extreme. The angle of repose as a threshold of steepness for hillslopes is one example, with thresholds of minimum slopes generally zero (flat). However, where clearly defined thresholds exist for both the positive and negative cases, oscillation between these may appear to be constrained around a central tendency rather than by the extremes.

For example, imagine a frictionless pendulum swinging back and forth at a constant rate along a constant path. The path and position are constrained by the extremes of the arc, not by the central, vertical position, and no position or direction between the endpoints is more common, characteristic, or normative than any other. If the position of the pendulum and its direction of movement is measured at frequent but random intervals, the mean position will be the vertical position at the bottom of the arc. If this were interpreted as a normative equilibrium, then it would appear that movement away from this point is limited, and half the time the system would be moving toward this point. This is an example of apparent, pseudo-equilibrium, where observations are consistent with the notion of tendencies to return to a single normative state even though the behavior is actually characterized by oscillation between extreme states. The pendulum metaphor is not meant to imply a direct analogy to equilibrium concepts in geomorphology. Rather, the intent is to illustrate how a halfway position in a cyclic or oscillating system could be misinterpreted as an attractor or equiilibrium point.

In alluvial rivers, for example, aggradation is ultimately limited by reduced floodplain accretion (as described above) and eventual flood stripping or bank failures if floodplain accretion exceeds channel accretion (Nanson, 1986) or by avulsions if channel accretion is greater than or equal to floodplain upbuilding. Incision-dominated degradation is ultimately limited by local base level and minimum slope requirements, and may be limited short of those extremes by exposure of bedrock or other resistant materials. Laterally-dominated erosion is eventually checked by valley side slopes and valley confinement, or by sinuosities so great that cutoffs become inevitable (Hooke, 2003; 2004). Neither aggradation nor degradation can continue indefinitely, even if external drivers such as tectonics, climate, or sea-level are constant.

In most alluvial rivers, net aggradation or degradation is the norm, and steady-state is rare and transient. The transitions from one state to the other, and the approach toward and achievement of steady state during these transitions (analogous to the pendulum swinging from one end of the arc back to the middle) do not represent any inherent tendency toward the steady-state condition, but merely a byproduct or emergent property of the oscillations between aggradation and degradation.

With respect to regolith thickness, while the thresholds limiting the upper limits are less clear, and oscillatory behavior appears less common, thicknesses may also vary from steadily increasing thickness to complete regolith stripping, with evidence for steady-state relationships (addition of new material by weathering or input via deposition roughly equals removals) relatively uncommon (see Phillips, 2010b and references therein).

In some geomorphic systems thresholds limit the amount or rate of change, or the accumulation of potential energy, but at the other end of the continuum the feature or phenomenon may simply disappear or become irrelevant. For instance, rates of karst dissolution, even where water and CO2 are not limiting, are ultimately limited by Ca concentrations and aggressiveness of the water and other limits on weathering kinetics (Dreybrodt and Gabrovsek, 2002). There are no feedbacks preventing reduction of dissolution rates to zero, however. 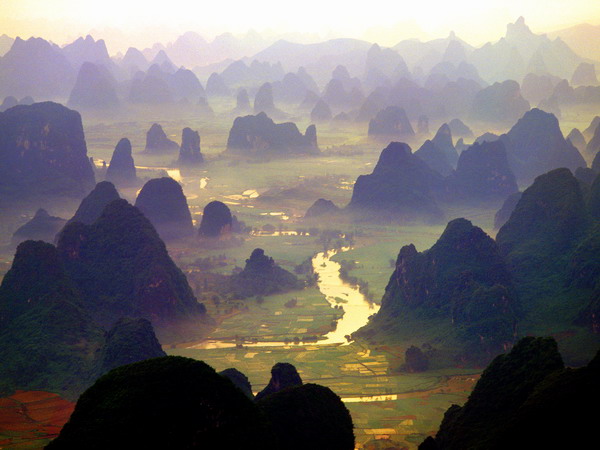 In some of these systems, such as karst, no relevant steady-state equilibrium (SSE) condition exists. While locally dissolution and precipitation may be balanced, in terms of landform and landscape evolution there exists only a continuum from the upper limits on the rate of karst processes and the extent of development of karst landforms, to rates of zero. In others the steady-state condition (e.g., shear strength = shear stress on a hillslope) represents one of the limiting extremes.

Thus steady-state may represent an intermediate point in some geomorphic systems (e.g. aggrading/degrading rivers; thickening/thinning regoliths), an upper limit in others (e.g., slope angles), and be irrelevant in still others (e.g., karst landscape evolution).  SSE therefore seems an inappropriate concept to represent normative behaviors or modal tendencies of earth surface systems in general.

Note: I previously dealt with threshold modulation in this article.

Hooke, J.M., 2003. River meander behavior and instability: a framework for analysis. Transactions of the Institute of British Geographers 28, 238–254.