UK Biology professor Jeramiah Smith, collaborating with scientists from 35 other institutions worldwide, was recently published in the prestigious journal Nature Genetics for his work with genome sequence of the sea lamprey. 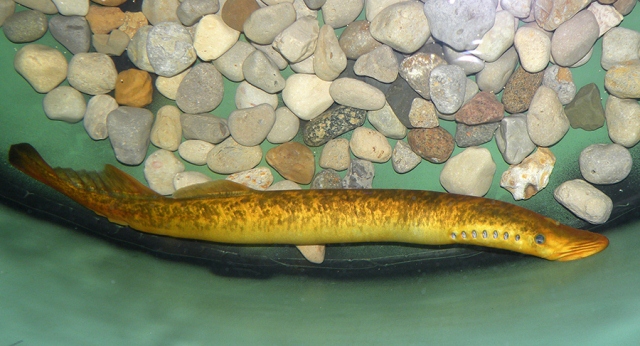 Lampreys are representatives of an ancient vertebrate lineage that diverged from our own, approximately 500 million years ago.  By virtue of this deeply shared ancestry, the sea lamprey (Petromyzon marinus) genome is uniquely poised to provide insight into the ancestry of vertebrate genomes and fundamentals of vertebrate biology.

"The reason that lampreys are interesting is that they are vertebrates, but are more distantly related from everything else that you typically think of as a vertebrate," Smith said. "Most vertebrates, in addition to having vertebrae, share characteristics like upper and lower jaws, paired appendages of some kind, and several other traits that we think of every time we think of a vertebrate. Lamprey share a lot of characteristics with vertebrates, but they don’t, for example, have upper and lower jaws or paired appendages. They only have fins that run down the middle of their bodies.  … the evolutionary divergence between lampreys and other vertebrates happened in deep evolutionary history we think somewhere between 500 and 600 million years ago.  So by comparing the lamprey genome to the genome of other vertebrates, we think that we can learn something about our deep ancestry."

The paper presents the first version of the lamprey genome assembly, generated by overcoming challenges presented by its high content of repetitive elements and GC bases as well as the absence of broad-scale sequence information from closely related species. Analyses of the assembly indicate that two whole genome duplications likely occurred before divergence of ancestral lamprey and gnathostome lineages.

The results help define key evolutionary events within vertebrate lineages, including the origin of myelin associated proteins and development of appendages. The lamprey genome provides an important resource for reconstructing vertebrate origins and evolutionary events that have shaped extant organisms and their genomes.