For University of Kentucky history Ph.D. student Jeffrey A. Keith, this statement has meant following history in a number of different directions, including Appalachian Studies, race relations in the American South, and –– his current dissertation work –– the cultural transformation of Saigon as a result of the Vietnam War.

Where Keith’s academic interests have traveled across the world, his academic career has boomeranged across the country: he has studied at Evergreen State College in Olympia, Wash.; Appalachian State University in Boone, N.C.; University of Wisconsin in Madison; and finally, at the University of Kentucky, where he has spent the last six years studying Southern history, as well as various facets of United States foreign relations. 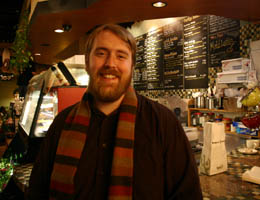 “I was really happy to be a part of this program after being part of other school systems,” he said. “At this department, I’ve been able to study the local –– what’s happening in Eastern Kentucky and what’s happening around here –– but I’ve also been able to study the global. It’s the interactions between the two that I focus on in history: the cultural, social dimensions of U.S. foreign relations.”

To that end, Keith’s master’s work at the University of Kentucky focused on the cultural diplomacy of Commodore Matthew Perry, the sailor and diplomat whose celebrated trips to Japan cemented his legacy of opening Japan to America for trade and diplomacy. Under the guidance of professor emeritus George C. Herring, Ronald D. Eller and Joanne Pope Melish, Keith was able to produce a thesis that was selected to represent the University of Kentucky’s College of Arts & Sciences as “Outstanding Thesis of the Year” for the Association of Southern Graduate Schools.

Keith credits these professors and others at UK with nurturing his interest in foreign relations and his eventual interest in how those relations played out in the Vietnam War, an interest that piqued at a time when he said “Baghdad was falling to pieces.” It seemed relevant, he felt, to look at Saigon to see what was different about that experience and what could be learned from it.

At the time, Keith was working with Herring, whose book “America’s Longest War” Keith credits as  “the most celebrated history of the Vietnam War.” His work with Herring, Melish (whose expertise lies in the history of racial production) and Herring’s successor Lien-Hang T. Nguyen (a specialist in United States foreign relations and Vietnam Studies) led Keith to the dissertation topic of the “so-called Americanization of Saigon” –– what happened culturally and socially that changed Saigon, and whether or not this mattered in the scheme of foreign relations. He is specifically examining the impact the American presence during the Vietnam War had on youth culture in Saigon.

“I think in Southeast Asia, during the Vietnam War, a lot of these same issues that I’m interested in generally [were at the forefront] –– the role of race in U.S. history, the role of popular culture in U.S. foreign relations,” Keith said. “How do individuals’ interactions affect U.S. foreign relations? Do they? What is the relationship between culture and war? These are really broad topics, and they are relevant across the spectrum, but it’s been fun to do these particular case studies and look at one city over this really tight time period and how it changed.”

While Keith has found that a lot of the people in South Vietnam adopted western culture to varying degrees, and loosely uses the term “Americanization” to this end, he is excited about complicating the general understanding of Americanization.

“What was going on wasn’t as simple as that,” he said. “There were many influences in Saigon. ... There were already an immense amount of cultural influences at play when the Americans arrived. By the time the Americans had begun fighting Saigon was a vastly complicated place, politically, socially and culturally. So what I’m studying is how young people interacted in this place –– what things they came to share and what things they grew to resent each other for.”

So far, Keith has looked to memoirs, travel writing, journalism, English-language American journalism (i.e., New York Times), but also English-language Vietnamese journalism (two English language dailies existed in Saigon during the war, written by Vietnamese people, that catered to the American audience). Drawing from a particular interest in the power of oral history, he will be doing interviews with Vietnamese people who lived through the war and fled Saigon in 1975. He expects to defend his dissertation in December of 2009.

Keith’s experience at the University of Kentucky has provided him with academic opportunities beyond working closely with a group of professionals whose specific areas of expertise have directly lent to his own field of interest: he has been fortunate to have traveled with a group of students to Vietnam; to be able to practice the Vietnamese language with Vietnamese students here at UK; and to take part in extracurricular activities that he calls “pleasant diversions,” including the UK string band ensemble (which celebrates Appalachian music) and a Chinese music ensemble.

“They don’t have a Vietnamese music ensemble or I’d do it,” he said with a smile. “It’s been fun to have something to retreat to that I find personally satisfying.”