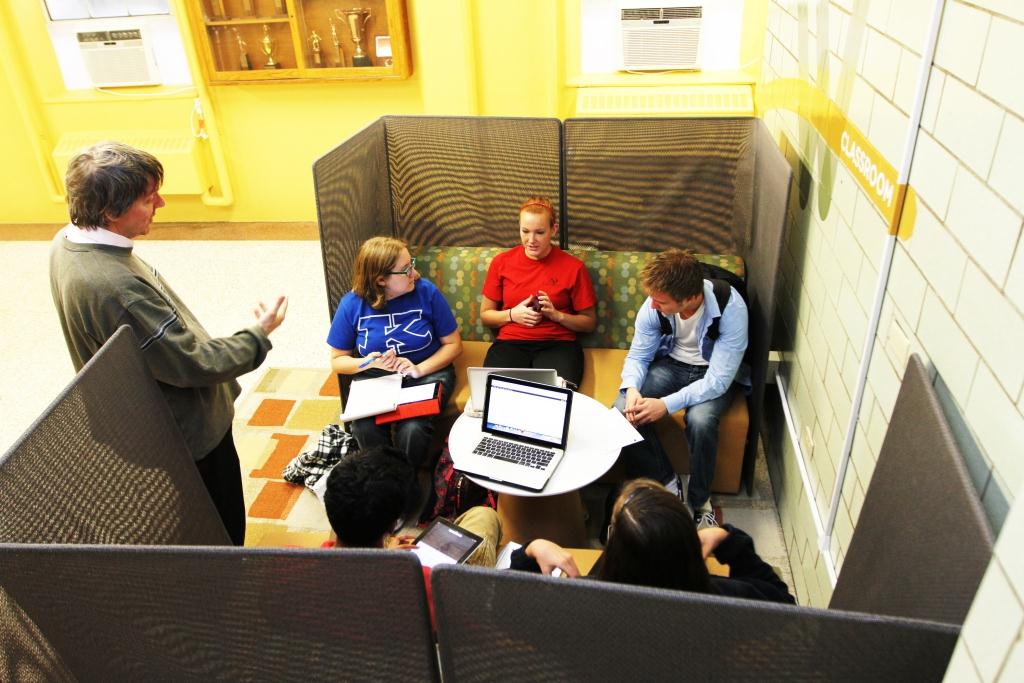 University of Kentucky freshmen pull out their iPads, gather in small groups around 21st century tables and begin to discuss physics problems in a way that's as far from conventional as the touch screens they are intently gazing upon.

This is just a typical afternoon for physics and astronomy Professor and Chair Mike Cavagnero's experimental A&S Wired research course: the Science of Measurement.

"Measurement and observation are the foundations of science," Cavagnero said. "Measurement is the first step in all of science, actually, and it's a step that's often left out of K-12 science education."

The 26 A&S Wired students who registered for the eight-week class have carried out customary physics coursework, but have also been asked to come up with their own projects. "It’s meant to be an exploratory course," Cavagnero said, "and intended to be as much fun as anything else.”

The ultimate goal is for students to take on one of four measurement projects from around campus and complete the endeavor using iPad measuring tools.

"At least 75 percent of students on campus have a phone or other cellular device, and they are using it all the time," Cavagnero said. "The iPad has built-in high-tech gadgetry. This is new for me too, but we're just trying to get our students to think about the technology they are using."

There are challenges to the final projects, which range from measuring the speed of the Patterson Office Tower elevator, to the Earth's radius, but these undergraduates take each difficulty in stride, overcoming the issues with a clear identification of the problem, dialogue and then the answer.

"It's been difficult, but because we have different backgrounds and skills, we help each other out," said freshman psychology major Julia Grzech.

"These are rather challenging projects — not cookbook," Cavagnero said. "Students really had to find their own way."

Cavagnero wants his students to experience science and compare it to the world that surrounds them. "We're asking more of our students than ever before," he said. "And as teachers, we've got to rise to the challenge."

Physics has historically been more individualistic compared to biology or other sciences, according to Cavagnero. "We have to better educate students about collaboration with other disciplines, because that's the future," he said. "We have to work together to solve the world's problems."

A&S Wired is a new living and learning community at Keeneland Hall created by the College of Arts & Sciences. Debuting this fall, A&S Wired houses almost 200 freshmen in a unique interactive space that combines education and residence life.

"Maybe we don't cover the basic principles of micro-electronic circuitry, but these students are paying attention and using technology for more than social networking, films and music, although that's a lot of fun too." said Cavagnero.