Reflecting the University of Kentucky's growing leadership in ensuring more diversity in graduate studies, President Eli Capilouto Friday announced that the university's Department of Mathematics, within the College of Arts and Sciences, has been awarded a $559,626 National Science Foundation grant to fund the new Graduate Scholars in Mathematics program.

Thirteen University of Kentucky students took home top honors at the Kentucky Academy of Science 100th Annual Meeting in November, including eight students in the College of Arts & Sciences.

The University of Kentucky Office for Undergraduate Research has presented 17 students with the Oswald Research and Creativity Program awards.

Undergraduate instructional assistants within one of the university's newest Living Learning Programs, STEMCats, use their past experiences to mentor incoming UK students.

The Department of Mathematics is excited to welcome Assistant Professor Dave Jensen to its faculty!

Have you heard of M.C. Escher? Origami?

The widespread popularity of these and many other intellectual staples of popular culture is largely due to one man: Martin Gardner. 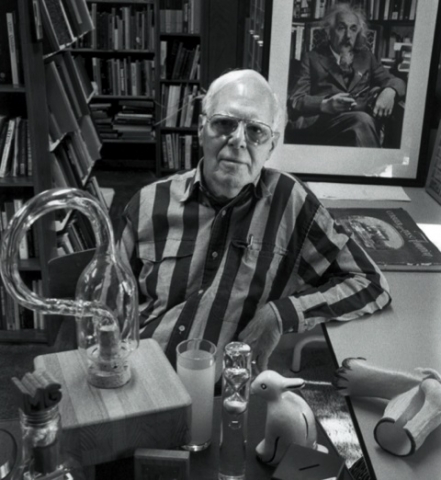 He is said to have created more mathematicians than any other person in history, through his numerous books and long-running recreational math column in Scientific American. Widely revered among mathematicians, Gardner passed away in 2010. However his influence and legacy continue to inspire us to approach seemingly intractable problems from unconventional angles.
"Gardner's greatest skill was his ability to communicate complex mathematical ideas to the layperson," said math graduate student Cyrus Hettle. "His books and especially his long-running column in Scientific American are full of ideas that are central to modern mathematics, but Gardner – whose mathematical education never went beyond calculus – made them accessible to anyone with a high school mathematics education."
"Gardner also presented mathematics in a truly multidisciplinary way. Not only did he explain mathematics using puzzles, games, and magic tricks, he found mathematics and mathematical ideas in poetry and art," Hettle explained.
The Celebration of Mind is an international celebration of Gardner, who would have turned 100 this year. "This is the fourth Celebration of Mind at UK, and I'm excited to be a part of this global event," said Hettle, who is heading up this year's festivities.
There are over 80 events worldwide, on every continent except Antarctica. UK's event will be on Monday, November 3, from 4:45 to 5:45 p.m. at the Math House. Refreshments will be served, as well as confections for the mind - all the mathematical games, puzzles, and magic tricks one can imagine to honor the contributions of Gardner.
Faculty, students, and all others with an interest in mathematics are invited to attend!
For more information, contact Cyrus Hettle at cyrus.h@uky.edu
Also check out the International Celebration of Mind website at celebrationofmind.org.
Date:
Monday, November 3, 2014 - 04:45 pm - Monday, November 3, 2014 - 05:45 pm
Location:
Math House, 654 Maxwelton Ct
Tags/Keywords:
mathematics
Type of Event (for grouping events):
Celebration of Mind

The Department of Mathematics is excited to welcome Assistant Professor Martha Yip to its faculty!

The Department of Mathematics plans to fill several faculty positions for the fall of 2015. We are searching for candidates in core areas of mathematics including analysis and partial differential equations, topology, and algebra. We also are interested in mathematicians with an interest in applications to economics or biology. In addition to these tenure track positions, we are searching for a post-doctoral scholar and several lecturers. Candidates should apply through mathjobs.org.

The Department of Mathematics is excited to welcome Assistant Professor David Murrugarra to its faculty!

As the second lecture of the 2014-15 Chellgren Seminar Series, professor of mathematics Carl Lee will deliver a talk titled "Stillness in Motion: The Essence of Symmetry" at 7 p.m. tonight in the William T. Young Library Auditorium.
Subscribe to mathematics