Two Chosen to Receive Honorary Degrees at UK's May Commencement

The University of Kentucky Board of Trustees approved honorary degrees to be presented at the May Commencement to professor of mechanical and aerospace engineering and NASA researcher Vijay K. Dhir, as well as biology professor and president of the University of Iowa, Sally Mason. 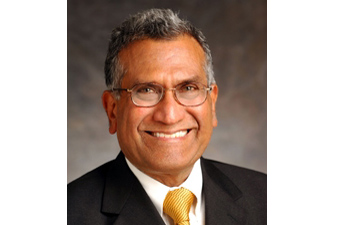 Born in India, Dhir came to the United States in 1969 after receiving his Bachelor of Science degree from Punjab Engineering College in Chandigarh, India in 1965 and his Master of Technology degree from the Indian Institute of Technology in Kanpur, India in 1968. After receiving his Ph.D. from the University of Kentucky in 1972, he joined the faculty of UCLA and continued consulting for numerous organizations, including the Nuclear Regulatory Commission, GE Corp., Hughes Aircraft, Rockwell International and the Los Alamos and Brookhaven National Labs.

Having served as vice chair and chair of the UCLA Department of Mechanical and Aerospace Engineering, as well as the school's associate dean for academic and faculty issues and Interim Dean, Dhir has worked to make UCLA Engineering a hub for interdisciplinary research. In recent years, the School has won seven competitive research centers from the federal government and private industry, amounting to more than $150 million dollars to spur research and development on emerging technologies.

Dhir maintains an abundance of accolades, including the 2004 Max Jakob Memorial Award, the American Society of Mechanical Engineers (ASME) Heat Transfer Memorial Award in the Science category, the Donald Q. Kern award from the American Institute of Chemical Engineers, the Technical Achievement Award of the Thermal Hydraulics Division of the American Nuclear Society and the Thurston Lecture Award of ASME. In 2006, he was elected to the National Academy of Engineering – among the highest honors awarded to engineers – for his work in boiling heat transfer and nuclear reactor thermal hydraulics and safety.

Dhir has conducted pioneering research in fundamental and applied sciences involving boiling. This expertise led him to working in a NASA research program, examining the effects of boiling in space, and developing an innovative method of removing high heat fluxes from power amplifier chips. In 2004, Dhir was selected as an inductee into the University of Kentucky’s Engineering Hall of Distinction.

Mason, a first-generation college student and the child of an immigrant family, received her Bachelors of Arts degree in zoology from the University of Kentucky in 1972. After earning a Ph.D. in cellular, molecular and developmental biology from The University of Arizona, she joined the University of Kansas in 1978. Throughout her 21 years in Kansas, Mason served as a full professor in the Department of Molecular Biosciences, Acting Chair of the Department of Physiology and Cell Biology, and Associate Dean in the College of Liberal Arts and Sciences. In 1995, she was appointed Dean of the College of Liberal Arts and Sciences, the largest academic unit on the University of Kansas campus.

After serving as Provost of Purdue University from 2001-2007, Mason acquired the position of president at the University of Iowa. There she began a sustainable university initiative, making sustainability a central priority in all aspects of the University enterprise—its operations, its academic mission and its greater responsibilities to society. She also presided over the university in 2008 during the historic flooding in Iowa; her leadership united the university and community in preserving as much of the university’s resources as possible, as well as restoring essential facilities to open the campus for fall semester courses.

As the author of many scientific papers, Mason has obtained a number of research grants from the National Science Foundation, the National Institutes of Health, the Wesley Research Foundation, and the Lilly Endowment. Since 2006, Mason has been appointed by the President of the United States for three terms on the National Medal of Science Selection Committee, which she currently chairs. She has also served as Chair of the Advisory Committee to the National Science Foundation (NSF) Directorate for Education and Human Resources (EHR) and Chair of the American Association for the Advancement of Science (AAAS) review panel of the NSF Science and Technology Centers Program.

In 2008-2009, President Mason co-chaired the Task Force on National Energy Policy and Midwestern Competitiveness of the Chicago Council on Global Affairs.  In 2009, Mason became a member of the Board of Trustees of the Herbert Hoover Presidential Library Association, and in 2010 was appointed to the National Transportation Policy Task Force.