UK Axolotl Symposium: Get to Know This Strange Salamander

LEXINGTON, Ky. (Feb. 21, 2014) — The axolotl may look like a creature from a science fiction movie, but researchers at the University of Kentucky say these stra 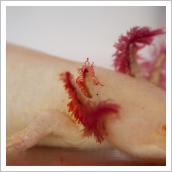 nge little salamanders have a lot to teach us.

On Monday, Feb. 24, the university will host a daylong symposium, titled "How Mexican Axolotls Promote Science, Conservation, and Creativity," sponsored by the UK College of Arts and Sciences, Department of Biology, and Department of Hispanic Studies.

The axolotl (rhymes with "tax a bottle") is unusual in that it does not undergo a metamorphosis between its juvenile form and adulthood, as do most salamanders, a trait known as paedomorphism, the retention of juvenile traits by adults.

"Axolotls are the most famous paedomorphic salamander," said UK biology Professor S. Randal Voss, who has spent much of his career working to identify the genes that make axolotls maintain their youthful appearance. "They appear to never grow up."

Axolotls, among certain other species, also have the ability to regrow functional limbs in response to trauma. Salamanders in general are of interest to researchers in several areas of biomedical science, including tissue regeneration, neural transmission, vision, olfaction, and aging.

Monday's symposium will bring together scholars from a variety of different backgrounds to discuss not just the axolotl's importance to medicine, but also its significance in Mexican literature and culture, and its status as a "flag species" to restore Mexico's most important and managed wetlands. 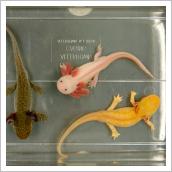 "The symposium has something for everyone," Voss said. "For historians, it chronicles the history of salamanders in science. For literary types, it shows how the axolotl has inspired famous poems and stories. For scientists, it presents the most up-to-date information about axolotl research and ongoing conservation efforts in Mexico. It really is a great opportunity to see how University of Kentucky's great collection of young scientists work with the axolotl in their research."

The symposium, which is free and open to the public, runs from 9 a.m. to 5 p.m. in the auditorium of UK's William T. Young Library. For more information, including a complete schedule of presentations, please visit http://bio.as.uky.edu/how-mexican-axolotls-promote-science-conservation-and-creativity.