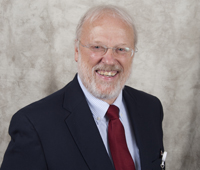 The Society for Free Radical Biology & Medicine recently named the University of Kentucky's Dr. Allan Butterfield as the recipient of its 2013 Discovery Award.

The SFRBM's Discovery Award is given out every other year to a researcher who has presented significant advancements in the field of redox research. Recipients must be nominated by a SFRBM member with details justifying their consideration. Butterfield was nominated by professor Daret St. Clair of the UK Department of Toxicology, with a seconding letter written by professor Barry Halliwell, from the National University of Singapore.

The Senior Awards Committee evaluated eight candidates that were nominated for the 2013 Discovery Award. Butterfield was recognized for his role as a pioneer in developing and investigating the model of amyloid beta-induced early oxidative stress in the progression of Alzheimer's Disease and Amnestic Mild Cognitive Impairment. He has been a leader in the field of redox proteomics, having applied these and other tools to unravel relevant targets of brain protein oxidation in neurodegeneration and relevant mechanisms of cancer chemotherapy-mediated cognitive dysfunction. This highly mechanistic and translational work provided relevant contribution as a worldwide reference in this area of investigation.

"Receiving the 2013 Discovery Award from SFRBM is a recognition from my peers for the discoveries and accomplishments from my laboratory in Alzheimer's disease and 'chemobrain,' that reflects the efforts of extraordinarily talented postdoctoral scholars, graduate students, and undergraduates who have been in my laboratory," Butterfield said. "The interactions and collaborations with outstanding scholars at UK and worldwide that I have been fortunate to develop have been instrumental in our laboratory's success that led to this award. I am truly grateful to SFRBM for this recognition.  Past recipients of the SFRBM Discovery Award are pioneering giants in the field of free radical biology and medicine, so receiving this award is both personally gratifying and extremely humbling to me to be joining such a group of leaders in this field."

Butterfield will give a featured lecture at SFRBM's 20th Annual Meeting in San Antonio, Nov. 20, titled, "Pathogenesis and Progression of Alzheimer’s Disease and Potential Mechanisms of Chemotherapy Induced Cognitive Impairment: Roles of Oxidative Stress and Insights from Redox Proteomics." He will also be presented with a cash award, medal and offered an invitation to publish a review article in Free Radical Biology and Medicine, SFRBM's journal.

Butterfield is the Alumni Association Endowed Professor of Biological Chemistry at UK and serves as director for both UK's Center of Membrane Sciences and the UK Markey Cancer Center's Free Radical Biology in Cancer Shared Resource Facility. Additionally, he is a faculty associate for UK's Spinal Cord and Brain Injury Research Center and is a faculty member of UK's Sanders-Brown Center on Aging.

In addition to this year's Discovery Award, Butterfield was named a Fellow of the Society for Free Radical Biology and Medicine in 2012, one of only 28 Fellows for the Society worldwide. In 1998, he received the Presidential Award for Excellence in Science, Mathematics, and Engineering Mentoring from President Clinton in the White House for his success in educating and training women, persons from Appalachia, and persons of color in the discipline of chemistry, all groups that are nationally underrepresented especially in faculty ranks in chemistry.