Anna Bosch joined the University of Kentucky in 1990, and has been an Associate Professor of Linguistics and English since 1996, serving as Director of the Linguistics Program from 1997-2006. Bosch earned a double degree in linguistics and the College of Letters from Wesleyan University, and received her graduate degree in linguistics at the University of Chicago. Her research interests include phonological theory, field methods and dialectology (primarily Scottish Gaelic and North American). Bosch has authored numerous articles in the field of linguistics and has over a decade of fieldwork research on endangered and minority languages. She has twice been a Visiting Fellow at the Institute for Advanced Studies in the Humanities at Edinburgh University, and has received research grants from the American Philosophical Society and the Thomas J. Watson Foundation; she has also served on the selection committee for the Watson Fellowship, and as a consultant in ‘analytical reasoning’ for ETS.  In her role as Associate Dean for Undergraduate Programs in Arts & Sciences, Bosch oversees curricular and program changes, implementation of the General Education curriculum, programmatic assessment, enrollment management, online education, and interdisciplinary programs. 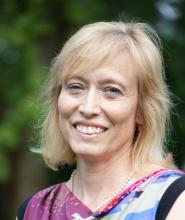