With an undergraduate career heavy in business and marketing, and several years experience working in an advertising firm, Cindy Isenhour might seem like an unlikely candidate to suddenly turn her academic focus toward anthropology.

“In my spare time, I was becoming more and more interested in issues of social and environmental justice,” Isenhour explained about her switch in focus. “I started to realize that there were a lot of contradictions in my own life - in terms of sustainability, working in an industry that drives consumerism.”

As it turns out, her relationship with marketing and advertising made her uniquely qualified for the direction her research would take: the culture of consumption, and how it pertains to sustainability. Isenhour, who has a B.A. from Miami University and a master’s in anthropology from Colorado State, plans to defend her dissertation, “Building Sustainable Societies: Exploring Sustainability Policy and Practice in the Age of High Consumption” this August.

Intrigued by Sweden’s progressive approach to sustainability and responsible consumerism, Isenhour chose to focus her research on that country in particular, traveling there twice over the course of her research. After applying for a handful of grants, her trips were funded completely, with the help of awards that included a Fulbright fellowship, dissertation grants from Wenner-Gren, the American-Scandinavian Foundation and a graduate travel award from the University of Kentucky. After exploring dozens of government and non-government organizations geared toward sustainability-related projects, she chose five to help direct her to the sample of consumers who would participate in interviews and ultimately help paint her picture of the country’s sustainability movement, as it relates to consumer behavior. 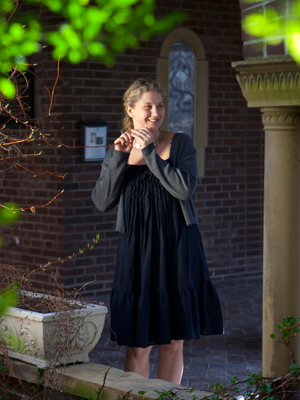 The project was essentially broken into three components, Isenhour said, starting with an understanding of consumer culture, and how that culture interacts with perceived environmental risk. “We in post-industrial urban societies perceive environmental risk, but at the same time are very removed from the environments that we rely upon,” she explained. “Very few of us have contact with the land in a productive way, so we have to (respond to that) in one of the only ways we know how – and that’s through the consumer role.”

The next part of her research was a look at international sustainability policy and sustainability projects in general – a focus that Isenhour explains has changed over the years.

“It used to be focused on these large-scale, infrastructural, government-funded programs to improve efficiency or improve pollution-reduction. But now the tide has really shifted to the idea that consumers must take responsibility,” she said. “If consumers want it, they’ll demand it – this is part of free-market ideology.”

And the third part of the study was a question of context, history and locality: Why is it that Sweden, of all the countries in the world, has one of the most progressive movements toward sustainable consumerism?, Isenhour wanted to know. “If you look at international surveys - at the number of citizens who are buying into eco-labeled products - why is it that Sweden in particular is so into this? Is there anything we can potentially learn from that, from programs that the government has undertaken in the past, that might give us clues about how to further sustainability efforts in other locales?”

The response Isenhour got from her participants was overwhelming – her Swedish sample was generally quite eager and willing to talk about their attitudes about sustainability. Through a series of interviews with over 100 subjects, Isenhour was able to decipher a number of “really interesting and new insights,” she said, one of which challenged a very common assumption in mainstream economic theory.

"Here in the United States, a market-based economy with a strong capitalist bent, there is a tendency to conflate an individual's personal utility with self-interest,” she explained, “whereas in other societies that we’ve studied both contemporary and throughout anthropology’s history – we know that there’s often much more communal understanding of utility.”

According to Isenhour’s findings, many Swedes acting in the interest of sustainability are motivated by their concerns for global equity, rather than self interest. To help explain this Isenhour points to Sweden's long history of social democracy which worked to emphasize equality, solidarity and respect for common humanity.

“People weren’t responding to perceptions of environmental risk that directly affected them. They thought about risk, but they didn’t worry about how it would affect them,” she said. “Most of them were driven by a concern for global peace, global equality, social justice on a global scale – not so much a concern that global warming was going to affect Sweden, but was going to affect the really poor people of Africa and these island nations who don’t have the economic means to respond.”

Isenhour’s study uncovered many other topics as well – unexpected – including findings on gender and class and the effect these factors potentially have on one’s inclination toward sustainability (“people in positions of less power tend to have lower risk thresholds,” and thus tend to react more quickly to perceived notions of risk, she explained), and the connections between consumerism and other forms of civic responsibility. And though her dissertation has not yet been published, the impact of Isenhour’s findings on the global conversation of sustainability can already be felt, according to her advisor Lisa Cligget, who sits on her committee along with Mary Anglin, Thomas Håkansson, Ellen Furlough and Sarah Lyon.

“As social scientists, it is our primary job to investigate topics of true societal and global significance. Links between ecological sustainability and consumer practices are one such topic, and Cindy is doing genuinely cutting edge research in this area,” said Cligget. “She is already on her way to becoming a nationally and internationally respected scholar.”

Isenhour chalks up much of her success to the anthropology department. “The department is known for being one of the top five for applied anthropology, and I came here with that understanding,” said Isenhour.  “But the really nice thing about the department is that in spite of having that kind of specialty and prestige, it’s a fairly small department with a lot of talented faculty, and you end up with a lot of attention from your committee. The department has been phenomenal.”
Tags:
student success stories
cindy isenhour
anthropology