Gothic-and fantastic-themed films and literature have, in recent years, increasingly gained credibility with the masses, particularly with the popularity of “The Lord of the Rings,” “Harry Potter” and – perhaps on a smaller scale – Mexican director Guillermo del Toro’s “Pan's Labyrinth.” With the massive artistic and literary (not to mention financial) successes of these films and novels, the genres have also been gaining widespread notoriety in the academic world, despite having been traditionally cast aside as being a genre that is not intellectual, significant or of good taste.

University of Kentucky Hispanic Studies Ph.D. candidate Nadina Olmedo hopes that representations of the genre as cliche, sensational or not-intellectualized are obsolete. With her dissertation, Olmedo hopes to shed light on the significant role that this genre has played on the Southern Cone region of Latin America—particularly in “unveiling anxieties, repressions and manifestations of social decay that underlie common codes of social decency and the conventions of maintaining an oppressive social tradition.”

Olmedo focuses specifically on novels and films of the Southern Cone (which includes the countries of Chile, Argentina and Uruguay), a region where, she argues, there has been “a particular recurrence and consumption of this genre which has not been deeply analyzed.” 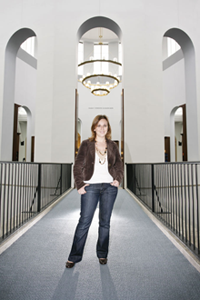 According to Olmedo, gothicism is a literary and cultural movement that is impossible to define, due to its complexity and the fact that it has been changing and evolving for two centuries or more. “It has had a lot of mutations, more so in the 20th century with the influence of mass media, cinema, etc.,” she said. One can pinpoint, however, certain recurring themes and symbols within the genre – such as repression; decay; darkness; homosexuality and other acts that have traditionally been considered social, moral and sexual taboos.

Olmedo’s period of research starts at the beginning of the 20th century, the time period when she asserts that gothic literature first took root in the Southern Cone. While many of the aesthetics of the genre – vampires, ghosts, enchanted houses, etc. – have persisted throughout time, Olmedo discusses how those aesthetics have been mutated and revised to reflect the dominant and relevant socio-political themes of each era.

“At the beginning of the 20th Century, I discuss how gothic is used to comment on the effects of modernization and scientific/psychological discoveries in the Southern Cone,” Olmedo said. “Some decades later, during the ‘30s and ‘50s, I analyze the gothic as a powerful feminist discourse for women writers.”

The distinct gender differences between the male and female authors and filmmakers within the theme subsided over time – in the 21st century they have barely been present at all – but as Olmedo points out, the genre continued to serve as commentary on relevant socio-political themes. The gothic genre acted as a “mechanism to communicate social and moral decay in a typical-bourgeois Southern Cone family” in the mid ‘50s and ‘60s, and later questioned the socio-political repression that occurred in the Southern Cone in the ‘70s (the era in which Chile, Uruguay and Argentina each experienced the most stifling dictatorships in their histories).

Olmedo’s study of Southern Cone gothic and fantastic novels ends during the “Boom Period,” an era in the ‘60s and ‘70s characterized by a literary boom wherein many Latin American writers became popular throughout the rest of the world, particularly in Europe (including the Latin American writer who is perhaps most well-known in North America: Gabriel Garcia Marquez, commonly attributed as the father of realismo magico, or the magical realism genre).

While Olmedo’s examination of gothic novels ends with the Boom Period, she points out that virtually no gothic films existed before the 1960s in the Southern Cone. Thus, her examination of gothic cinema starts in the ‘60s, starting with the 1967 Argentinean film “Sangre de Vírgenes,”a vampire exploitation film that was prohibited in the country during the political dictatorship of the mid '70s.The examination continues into the 21st century, including a look at three “post-dictatorship” films. One of those films, 2002's“Sangre Eterna” by Chilean director Jorge Olguin (about a young subculture of urban gothic college students) represents how Southern Cone society has changed after 15 years of dictatorship. In the film, the characters are rebelling against the disappointment of adults and government, Olmedo argues, as students who want to become vampires because they are repulsed by the idea of growing old.

Olmedo’s says the culmination of her research “demonstrates that while the gothic aesthetic maintains a certain constant throughout the 20th century, its underlying meaning shifts to reflect the dominant political-social themes of each era—ensuring its continued relevance to popular audiences.”

Olmedo’s time at UK also marks not only her first time in Kentucky, but her first experience in the United States. Originally from southern Argentina (Patagonia), she received her B.A. in literature at the Universidad de la Patagonia San Juan Bosco and applied to UK on the recommendation of a Patagonian acquaintance.

“It has been a great experience. I have been learning a lot ever since I arrived,” she said of her time in Lexington. “The research you can do here is amazing.”

In particular, Olmedo has been impressed with the knowledge of her professors (Susan Carvalho heads her committee), the vastness of resources at the William T. Young library, and the opportunities she has had to travel – which has included presenting papers recently in both Germany and Mexico.

If you’re interested in reading more about the underreported significance of gothic genre on Southern Cone culture, you may have to wait until Olmedo is finished with her dissertation (she hopes to defend in the fall of 2009, and to continue teaching in the states for at least a while). But make sure you touch up on your español, as she is writing it in her native language.